The Police act as antagonists in Welcome to the Game II.

They are a SWAT team for the New York Police Department, recently cracking down on cyber-crime with militaristic, extremist methods.

The Police are represented by three-four Caucasian men dressed head to toe in black and grey SWAT armor. They're armed with G36Cs, outfitted with tactical lights, and stun grenades.

Interpreting Clint's excessive Deep Web usage as potential illegal activity, the Police will trace the protagonist's IP and raid his apartment. The officers will break down the door to the apartment and hurl a flashbang in, then throw Clint to the ground and aim their guns at him, resulting in an instant Game Over. The only way to prevent this is by periodically jumping from password-protected network to password-protected network to shake their tracings off his tail, which requires hacking with SkyBreak. Their raid is warned a few seconds earlier by very distant background chatter coming from the stairwell. The attack animation only activates if the player approaches the front door. If the player isn't home when they arrive, they'll instead ambush him when at the stairwell door. The Police are immune to Motion Sensors; use Police Scanners to warn their attempted attacks instead. They also attempt to lure the player out by shutting off the power.

Important tip: Always disconnect your Wi-Fi whenever you don't use it so the Police can't track you. 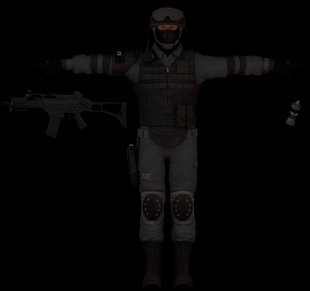 A SWAT model
Add a photo to this gallery

Retrieved from "https://welcometothegame.fandom.com/wiki/Police?oldid=7315"
Community content is available under CC-BY-SA unless otherwise noted.