The Executioner is a character in Welcome to the Game and the primary antagonist of The Waiting Room. He is a sadistic masked psychopath who hosts Red Rooms for the sickest of Deep Web lurkers like the player.

The Executioner is a tall bald Caucasian man in blood-soaked medical scrubs, black pants, and a hockey mask, who speaks in a theatrical Joker-esque voice and takes sadistic pleasure in entertaining the Red Room viewers at the expense of his victims.

After the player pieces together a Red Room URL through days of puzzle-solving, they can finally view a Red Room where they see the Executioner, in a dark padded room, wheel a cart of torture devices in front of the camera, where he slaps the restrained Victim awake, greets the viewers, and begins to torture the Victim. Fortunately, most of the torture is censored thanks to buffering, but a few glimpses still show the Executioner horribly maiming the Victim's face before slitting his throat.

In one of the secret endings, the Victim (real name Larry) is controlled rather than the Player, in the same scene witnessed by the Player in the default ending. However, this time, Larry can escape his restraints and the room as the Executioner has his back turned to talk to the viewers. Despite Larry's success, it's implied the Executioner re-captures him anyway. 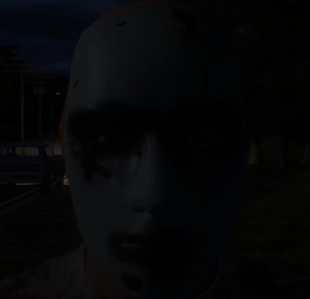 No longer bound to cutscenes, the Executioner is now the main active threat in The Waiting Room.

The Executioner looks identical to his original incarnation, except he's spotless of any blood aside from a few leaks and splotches on his mask, which almost makes him seem like a completely different character at a glance.

He patrols the titular underground dungeon and consistently checks up on the player's cell. If he catches onto their attempt at escape, he'll sock them in the face and induce a Game Over, so they must play possum in their bed whenever he gets close. His appearance can be foretold by looking through the cracks in the wall or by listening to background cues, such as whistling and footsteps. Most evasion of him consists of simply being quiet and waiting for his patrol to pass (each patrol lasts about a solid minute and are a little under 3 minutes in between, though he's ultimately very randomized), though when he checks up on the player's cell, he gets up close and personal, where they must mash Mouse 1 to keep their eyes shut as he lumbers over their face for a few seconds. 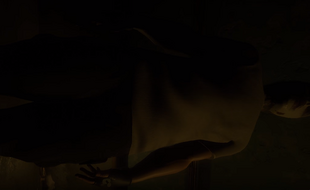 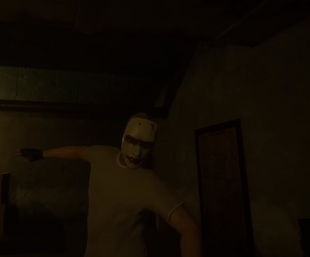 The jumpscare that occurs when the player fails to be quiet while wandering around the room.

The jumpscare that is given the Executioner catches the player browsing on the computer.

The jumpscare given when the player makes it to the vent but fails to be quiet.