This article is about the character. Did you mean his website?

The Doll Maker serves as a secret antagonist of Welcome to the Game II.

He's a Central European surgeon who immigrated from Germany to the United States to kidnap women and surgically twist them into immobile yet still living sex dolls, operating within The Doll Maker website on the Deep Web.

The Doll Maker is a Caucasian elderly man, balding with gray hair and eyes hidden behind a pair of specs. He's dressed in a long-sleeved white dress shirt with a black tie and the sleeves rolled up to make room for his black welding gloves, as well as a gray vest stained with a bloody handprint. He also wears gray pants, a brown apron, and matching boots, and is armed with a rusty serrated knife. He speaks in a whispery, almost welcoming voice thinly spiced with a German accent.

If Clint Edwards visits the Doll Maker's website, music similar to that from the site will be heard coming from his Apartment hallway a randomized amount of time later. There is no option to open the door, only to peek through the peep hole. A doll will be sitting outside, then the Doll Maker carries it away, followed by a power outage. If Clint leaves his room to turn the power back on or goes down stairs, the Doll Maker will seize him by the throat from behind and hold the serrated knife up to his throat and demand that you identify women in the Apartment and mark their doors with a doll head he left on his knob. The Doll Maker will then punch Clint in the back of the head to daze him long enough to escape down the stairwell. If Clint fails to look through the peep hole, the Doll Maker will simply shut off the power anyways before seizing him as normal.

In order to find women in the apartment so that you can mark their door, you will need to purchase the LOLPY disk and go to the alley to pick up the package. When you come back, the disk will be placed on your desk to the left of the monitor. The LOLPY disk can then be used to hack into the lobbies computer by inserting the disk in the computer below the desk. Search for female residents and place the doll head on the handle for one of their rooms. If the victim is near you, you will hear it. After he is done, the Doll Maker will return the door marker and request more victims until you have given him a total of five victims. The Doll Maker will also pay the player DosCoin as they provide him with victims, making the task less damaging to a player's chances of beating the game. 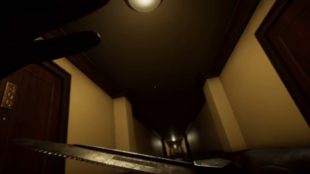 The Doll Maker seizing Clint from behind.